I seem to have spent a lot of time wrapping things this week, it started off with Mr. Stitches birthday present, moved onto some preparation for a workshop I'm attending in March, carried on with some thread wrapping of twigs and continued with wrapping some of my hand dyed threads onto card so they're ready to use in my embroideries.


I'm going to a Temari (Japenese embroidered balls) workshop with the Embroiderers Guild in March, I'm really looking forward to it as it's not something I've ever done before and I think they are beautiful so I'm looking forward to learning how to make them. In preparation I had to wind polysterene balls in tights and sewing cotton, which was oddly therapeutic! I hope my winding is even enough.


I've also been working on thread wrapping and dyeing some twigs. I don't want to write too much about them here as I'm planning a separate blog post dedicated to twigs and thread in the near future! Again, it is a very therapeutic process, rhythmic and satisfying but more on that at a later date...


I've been blogging less recently, I was thinking about why and as with most things there isn't just one reason but a combination. It isn't because I've not been doing things, as usual I've been busy with a variety of projects including properly starting another new job (I seem to collect them like other people collect stamps.) I think it is partly to do with the weather, I love winter but at this time of year it is easy to become despondent after days and days of overcast skies, cold evenings and dark mornings. I just want to get home, wrap up and shut out the world. Yesterday, however, we had snow! It made the journey to work a little challenging (Mr. Stitches and I were amongst the few able to make it in) but it also made the world very beautiful. And I had to wrap up (you can see where I'm going with this.)


It still sometimes surprises me how much I love living up here in Cumbria. I always thought of myself as a city dweller, I love the countryside but am never quite sure what to do with it. I used to love the bustle and energy of living in a big city (Manchester) and found it hard when I left for sleepy Penrith. I never thought I would settle up here but life has a way of changing your plans and now I live in Carlisle and work on what was once a farm (The Heathlands Project) and travel all over rural Cumbria to deliver workshops and am very happy! I live right on the edge of Carlisle, with the fells visible, the river nearby and easy access to the great outdoors. I digress somewhat but the point I was meandering towards was that I've not been blogging because I've been wrapped up in my own wintery world, and that's not such a bad thing. So, here's to wrapping up both literally and metaphorically!


Posted by Delicate Stitches at 12:18 No comments:

Despite the horrible weather the first session of the year was a good one. It was a very small group but we did have a new face which is always good and once we'd got in out of the cold there was a good atmosphere. Our model Paul had some great poses for us and I really enjoyed drawing and produced some work I'm quite pleased with.

I'd had a stressful day and sometimes this leads to me finding it difficult to settle into my drawing but this evening I decided I was going to just forget about the day and enjoy the session. I was really looking forward to just drawing and I think because I was relaxed and not worried about the outcomes my drawings were much better. I've also been more or less keeping up with my daily drawing which makes a huge difference, being in practice means that not only is my drawing better but I'm more confident and so more relaxed too.

I love drawing, I find it both relaxing and inspiring. Drawing allows me to step back from things, look at things in a different way and, at its best, figure things out. I love the almost alchemical process of drawing a pen or pencil over a sheet of paper and creating an image of something, creating a form on a flat sheet of paper. I'm not interested in creating an exact representation, I'm interested in catching the idea of the thing that I'm drawing. One of the things that I love about continuous line is the movement it creates, it is easier to capture the rhythms of the body rather than the exact shapes, giving a sense of the life of the subject.

As usual I worked entirely in pen this session as I was comfortable in my drawing and enjoying the images I was creating. I made plenty of drawings that are not so good too but it's all part of the process. Some of the poses had some great foreshortening and I really enjoyed trying to capture the odd shapes that this creates, It is a good exercise in drawing what you see not what you think you see as it often looks quite unnatural but once you get those odd shapes on paper you realise that is how it looks.

Thinking about the session afterwards led me to think back to other life drawing sessions, right the way back to college and university. The classes that I attended at uni often used a lot of props and I was thinking about the pros and cons of this. In some ways it's good to have the space dressed up and for the model to have various accessories and props as it can create a whole different atmosphere and spark off new ideas. On the other hand I really like the immediacy of just having the model to draw, with nothing else to distract my attention. Like most things I think probably a mixture of both is best, maybe I will add a few bits and pieces for the next session...
Posted by Delicate Stitches at 16:48 No comments:

The Chickens of Heathlands 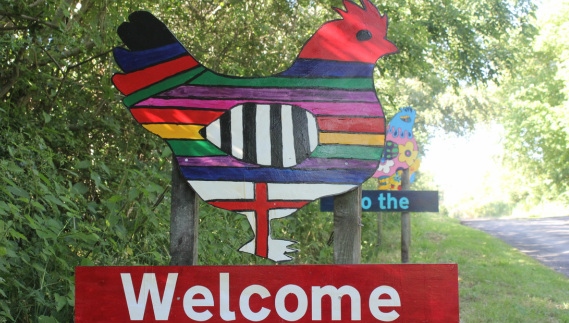 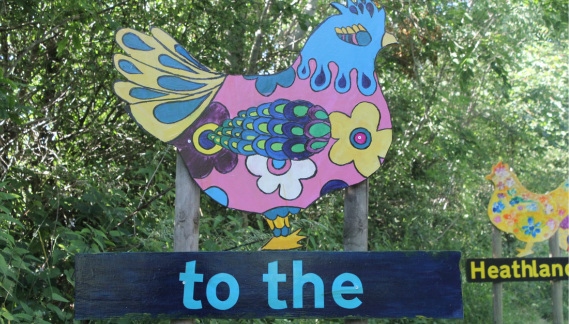 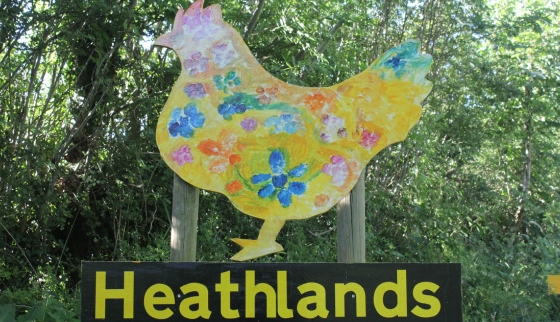 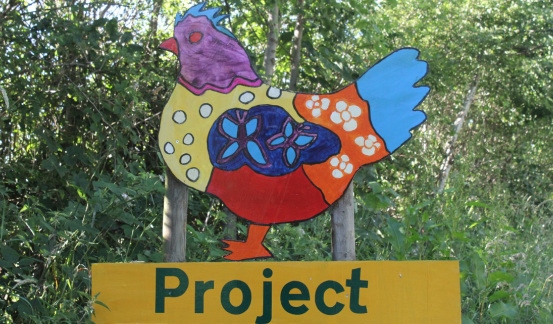 Sometime last year we decided to brighten up The Heathlands Project site with a welcoming sign on our driveway, this was partly to replace the sadly weathered rainbow sheep who had seen better days and partly for fun. We thought it would be good to have large wooden shapes (probably animals) painted up to welcome visitors and show them the way in. The guys chose chickens (several of the staff do have chickens on site) and so we had a little competition to design some funky chickens. The best designs were selected by the lovely Janette (admin officer and fount of knowledge) and we asked one of our excellent volunteers to cut us several large chickens out of plywood.

We then set to work painting them all up and getting them varnished and weather proofed. When this was done the chickens were installed in the lane, welcoming visitors to the site and hopefully brightening people's day!

The chickens were so popular that a request was made for more animals so I drew out some large silhouettes of various animals found on or around site and again the guys came up with a range of designs. Once again, they were cut from plywood, painted up, varnished and installed around site. Some of them have signs and point the way to places, others are just for fun. There probably aren't too many places where you can be shown to the cafe by a hedgehog or directed to the car park by a horse.

Posted by Delicate Stitches at 17:51 No comments: