A Walk in the Woods


As I wrote about in my last blog post, over the past couple of months I have been busy preparing for Carlisle Arts Fair. I've been able to spend some time in my studio making work and I've also had a chance to start playing around with some ideas that have been floating around in my head (and sketchbooks) for a while but which I haven't had chance to develop.


One of these ideas involved working with boxes; more specifically making small pieces of work that could be displayed in boxes. I was thinking about artefacts and museum displays and the idea of making something precious simply by putting it in a box, giving it protection and status. Making some pieces exploring these ideas was going to be one of the first things I did in terms of making work for the fair.

I had already amassed a small collection of boxes, including a wooden box with small compartments and a lid with a clear acetate panel and so I started working with these. I curated a collection of small objects and made some small pieces of tatted lace and a cushion for it to sit on. I included several feathers as well as I wanted the boxes to fit in with the rest of my work.


As often happens, however, things didn't go exactly according to plan. I spent a full day working on my box pieces and at the end of it I felt extremely dissatisfied with everything I'd done. It can be very difficult when you've had an idea in your head for a long time and then when you finally get to try it out it doesn't work quite as you'd hoped.


This left me feeling rather grumpy and as Mr. Stitches was also feeling a bit grumpy we decided the best thing to do was to go for a walk. We're very lucky to live in a very beautiful part of the world and we only have to walk for a few minutes before we're out in the countryside. As we walked and talked I felt my mood lift and new ideas started creeping into my brain. I'd been collecting interesting twigs and on this walk I found some beautiful magpie feathers too and as I was walking I started thinking of new ways of working.

Increasingly I've been interested in incorporating natural materials into my work and place (in the sense of location) has been becoming more important too. I wanted to create some pieces of work that were created from the environment and that continued to explore my interest in birds, feathers and the idea of the bird as representative of the human spirit.  I've also been looking into the folklore of various cultures that see birds (and feathers as representative of birds) as surrogates for the human spirit. The druids, for instance, created cloaks of feathers as they believed this would help them channel the bird spirits which would let them get closer to the sky gods and thus be able to transcend earthly bonds.

When I got back to the studio I started working with the twigs and feathers I'd collected as well as threads that I'd dyed naturally. I began to develop a personal vocabulary using these materials (more of this in another post I think) and I'm really excited about how this work could develop.


Posted by Delicate Stitches at 19:55 No comments:


After a very busy first half of the year I was feeling a little flat in terms of my own personal practice, I'd enjoyed the projects I'd been working on but I'd not had much time for my own work. I got the year off to a good start with my daily drawing, keeping it going through January and February but as time went on things started to slide, as they do, and I lost the impetus a bit.


One Sunday a couple of months ago I was meeting Mr. Stitches at the sports centre (not my natural habitat) and I saw a flyer for Carlisle Arts Fair. I'd been looking for a project that would give me an opportunity to spend some time developing my own work and provide an opportunity to share my work with others. This seemed like a good option as it was local, I'd been to one of the previous Fairs and liked it and I'd thought about doing this show anyway. I checked the submission details and realised that it was the last day for submissions so I went home, put together my submission and sent it off.

I was very excited to be accepted and since then having an event to work towards has really helped me prioritise my own work and helped me feel inspired to get going and get working! I have so many different strands to my work as a whole that often my own work falls to the bottom of the list because it doesn't have a deadline as such so a specific event such as this is really helpful for me.


I've really enjoyed spending time in my studio drawing, stitching and making. These are the things I love doing and having time to devote to them has been really rewarding and made me realise that I need to make this more of a priority. It's also fired me up with so many ideas that I want to explore. I've focused on making work that is less conceptual for the Fair so I've been focusing more on skills and aesthetics which has been quite liberating as I've been less worried about what it all means. As I've been less worried the ideas have been flowing and I've got lots of avenues I want to explore.


I'm writing this post partly as a break from all the practical preparation that goes into showing work; labelling, pricing, mounting (so much tape) and so on but now I must get back to it. If you're in Carlisle next weekend it would be lovely to see you!


Posted by Delicate Stitches at 11:12 No comments: 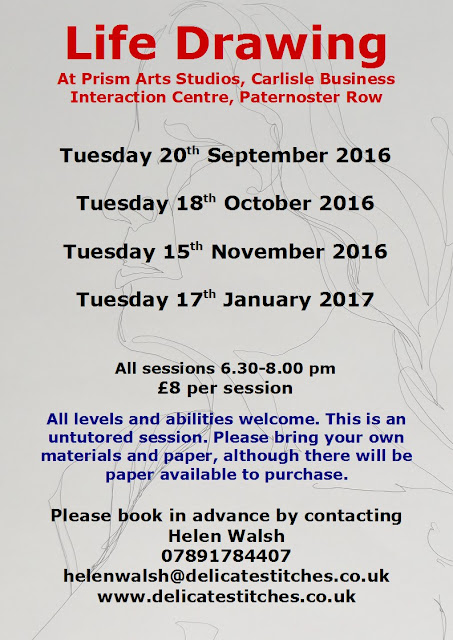 Posted by Delicate Stitches at 18:08 No comments:

On the Beach: The Heathlands Project Quilt 2016


Each year at The Heathlands Project I make a quilt with the members which we send off to The Festival of Quilts down at the NEC in Birmingham. Each year we do something a bit different and each year I swear we are never doing another quilt! However, it is a really good project to work on and provides the members with an opportunity to work on a big group project that can be shown to a big audience.


This year the guys chose the theme 'On the Beach' and at the suggestion of one of the other members of staff the quilt was made of felted patches. Felt making is a really great activity because it is so adaptable for a wide range of abilities and experience levels.


As some members have developed their skills over the years some of them were able to make their patches more or less independently. I think this is a really positive thing and I hope that the quilt project gives them chance to try something different as well as an opportunity to show off their skills.


As I only work part time at The Heathlands Project I rely a lot on the other members of staff to keep the project going in my absence. I really like coming in and seeing what the other groups have been up to. It also means that more people can get involved in the project.


There was a really lovely range of felt patches produced with some very imaginative and inventive designs and embellishments. There were also a couple of 'joint' patches where the members worked together to make the felt. I like making the quilts in patches as it means that people can work individually if they want to but there is still lots of opportunity for collaboration.


Rather unusually this year it wasn't as much as a rush as usual to complete the quilt and get it down to the show. This was partly because I started the project off really early in the year and partly because I was able to delegate a lot of the making. I still did the final construction but almost everything else was done by the members, volunteers and support workers.


It's really good having the finished quilt to show off and the members look forward to it coming back and hearing the judges comments. We may need to build a bigger building though so that we have room to display all the finished quilts...
Posted by Delicate Stitches at 17:35 No comments: