Another project finished this week, this time one done through my work at The Heathlands Project. In November last year we won some money through The People's Millions (thank you to everyone who voted for us!) One of our obligations is to provide a number of public events. We wanted one of these events to be a participatory art project so a couple of months ago (maybe more, I've lost track a bit) we went to speak to the community team at Carlisle Train station. They were really keen to work with us and offered us lots of support in terms of space and money for materials. They also had a suggestion for what the project could be about: the Quintinshill rail disaster.


This year is the centenary of the Quintinshill train disaster, the worst train disaster in British history. On the morning of 22nd May 1915 a troop train carrying soldiers en route to Gallipoli collided with a local passenger train, the express train from Glasgow then also collided with these two trains sparking a massive fire, a further two goods trains stood on nearby passing loops were also consumed by the fire. The precise death toll has never been ascertained as the roll list of the regiment was lost in the fire, which completely consumed some of the victims. It is believed that 214 soldiers and 12 civilians were killed with another 246 people injured. The accident happened near Gretna, making Carlisle the nearest large station and many local people have stories to tell of family or friends involved in the disaster.

As I was planning what to do or make for the project I did some research into flowers and their symbolism. Forget me nots symbolise true love and memories and were used to decorate gifts with the hope that the receiver would remember the giver. In Newfoundland Forget Me Nots are worn on the 1st July to remember those killed in the Great War. So, it seemed appropriate to use this flower to commemorate the people killed in the Quintinshill disaster, a local tragedy in a time of global tragedy. The use of train tickets had been suggested which also linked in well so I designed the project around decorating train tickets with Forget Me Nots.

Because I mostly work in textiles my first thought was to embroider train tickets with Forget Me Nots. These tickets could then be sewn together to make a hanging. As many people are not very confident sewing and as the aim of the project was to engage people at the train station (so they may not have had much time to spare) I thought it would also be good to decorate tickets with drawings of Forget Me Nots. I made some samples, some instruction sheets and some inspiration sheets and began to collect materials.


This was a slightly odd participatory project for me because although I designed the project, sourced the materials and put the final piece together I didn't actually do any of the participatory bits! This part of the project was led some of my colleagues at The Heathlands Project, working at the train station and Costa they engaged people using the station and encouraged people to decorate a ticket to become part of our final piece. As well as Forget Me Nots we extended the brief to include 'travel' so as not to alienate anyone who didn't want to stitch or draw a flower.


I then came in to stitch all the tickets together to make the final piece. It was so fantastic coming in and seeing the tickets people had created, some of them were really personal with poignant messages, some beautifully executed, some very imaginative but all done with care and consideration.


I constructed the piece by first sewing the tickets into strips of ten, one person had used the joined up tickets to make a series of train carriages which I thought would make a beautiful border for the piece. As he had illustrated 20 tickets I decided to make the strips 10 tickets long so I could have a border of train carriages at the top and the bottom.


It was all going very well and I was feeling quite pleased with myself having sewn together around 160 tickets when I then found a further 78 tickets in another box, a further 11 then emerged so I had to enlist my colleague to create another ticket as those who are good at maths will have realised that 160+78+11 does not equal a number divisible by 10!


Anyway, I got all the strips sewn constructed and set about sewing them together to create the final piece. This was somewhat challenging once I had a few strips sewn together because card does not behave in the same way as fabric and cannot be pushed and pulled in the same way without ripping. Once again my colleague helped me out, helping me manoeuvre the piece through the sewing machine. Incidentally, despite sewing together 250 train tickets I didn't break a single needle.

The final touch was adding the 100 crocheted Forget Me Nots that another colleague had made especially for the piece. They are really beautiful and finish it off perfectly.


The final piece was unveiled on Thursday 21st at the train station as part of the commemorative events, along with  a Gamelan performance by members of The Heathlands Project. I have enjoyed working on the project and I'm really pleased with the final result. Some of the tickets are so beautiful and some are really moving, I think it is something that people have been able to engage with and the resulting hanging demonstrates this. I think this piece works very well visually as well, the patterns on the tickets work well from a distance and then as you move in closer you can appreciate all the hard work that has gone into each individual ticket.
Posted by Delicate Stitches at 17:50 No comments:


The Woollen Woods is in it's third year now, it is an outdoor art installation comprising woodland themed woollen artworks in support of The Campaign for Wool. I took part with my Heathlands textile group in 2013 and this year with my Tullie Textiles group. There are several different locations this year, the nearest to me and my group being Talkin Tarn so we made our pieces for the woods there.


I went for a visit to see the installed art works at Talkin Tarn and it really was a great experience, so much time, skill and enjoyment has clearly gone into creating the pieces and the team who have put the works up have done a great job. There's a real variety of pieces done by a range of groups and individuals, some of the pieces are very life-like whilst others are more unusual! What I particularly enjoyed about wandering around the woods was seeing so many visitors, of all ages, engaging with the art works. There was a real sense of fun and interest with people calling out to each other to come and look at this or that.


Enough words, enjoy the pictures and if you're near any of the Woollen Woods sites I highly recommend you take a look. If I've pictured your artwork and you'd like it credited, please drop me a line and I'll be more than happy to do so. 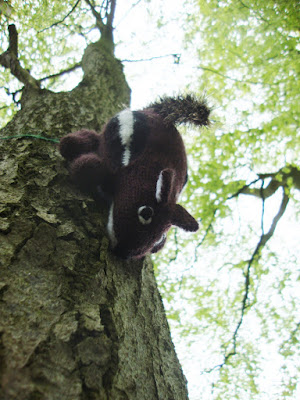 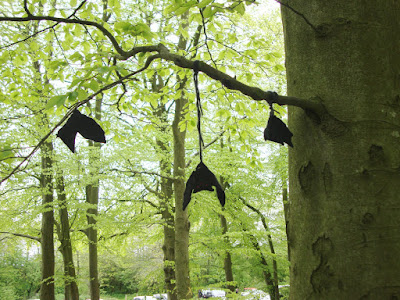 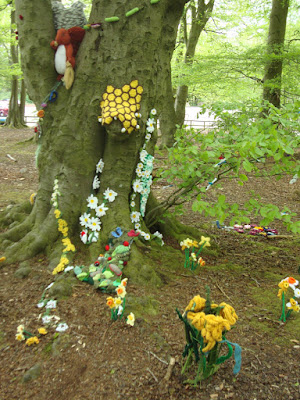 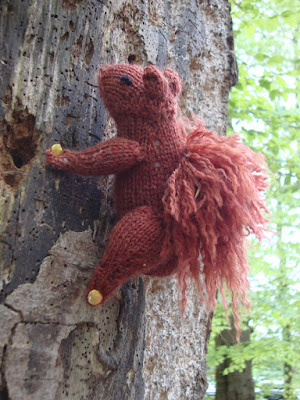 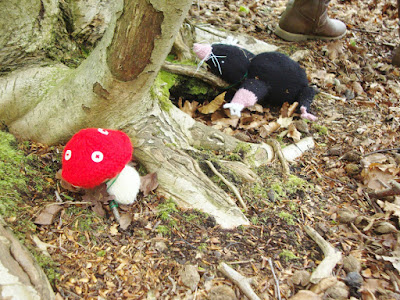 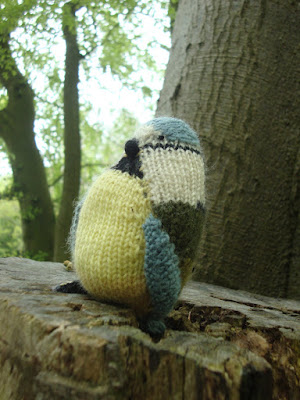 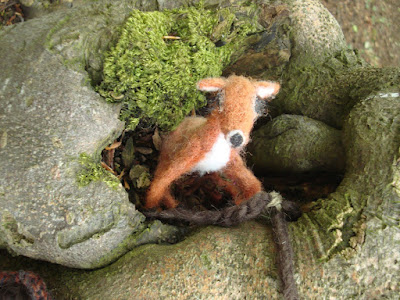 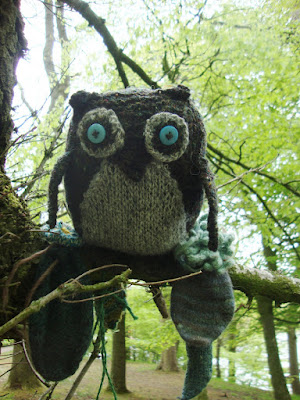 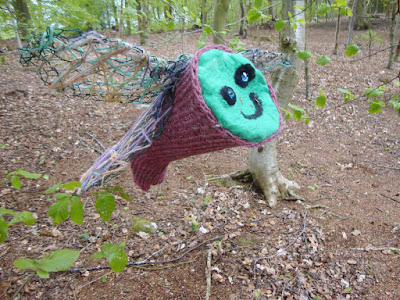 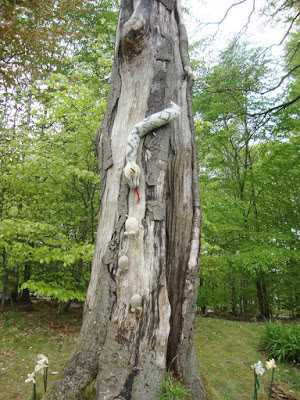 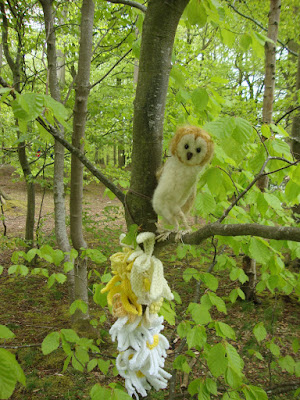 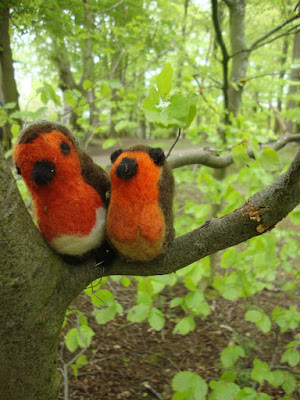 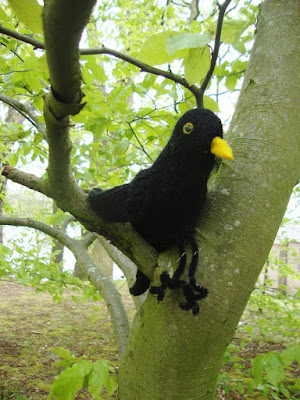 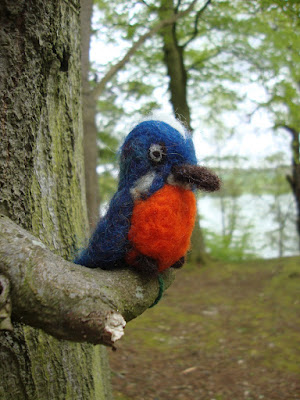 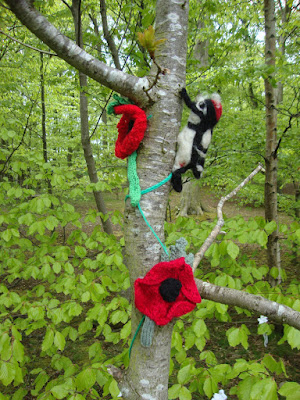 Posted by Delicate Stitches at 18:47 No comments: