Sometimes work just doesn't work. You have a great idea, you know how you want to do it but for some reason it's just not right. I had this problem whilst working on my piece for the Art House Co-op's Map Project. I had, it's true, left it a little to the last minute as life generally seems to have been insanely hectic recently. However, I had a pretty clear idea what I was going to do and how I wanted it to look. But it just wasn't happening, whatever I did it just didn't work which was very frustrating. I tried changing media and technique but to no avail. So, I left it alone which is sometimes the only option (well, that or complete insanity.)

Had I still had plenty of time to work on the project I wouldn't have been so bothered but as it was I only had a very small window to complete it if I was going to meet the postage deadline. As sometimes happens in these situations I rattled off a piece of work and ended up being far more pleased with the results than with all the other failed experiments. So, here is my completed piece. I had originally intended to do a large drawn and stitched map 'of experience' incorporating images of my hands and various layers of text, image and stitch. This piece would then have folded down to 4x6 inches, as stipulated in the brief. However, things did not go according to plan but I still wanted to keep the basic idea the same; to make a personal map of experience and what is more personal than your hands?

I began by photocopying my hand as I liked the correlation between fingerprints and map contours and the palm readers ideas about love lines and life lines and being able to tell a lot about a person from their hand. I then added washes of white paint and ink and when that was dry I began writing my experiences over where the lines in my hand would be. Some of the stuff I wrote was positive, these are the lighter areas, and some was negative, the darker, more densely written areas. I then added some stitching and cut it down to 4x6 and got it posted. Although it is not how I envisaged it I am pleased with it as it is personal and I think visually it is quite interesting.

Posted by Delicate Stitches at 20:10 No comments:


The first of this set of life drawing sessions. It was very quiet again but I really enjoyed the session. Our model gave us some excellent poses and it was good to be back after a break of a few weeks.

Posted by Delicate Stitches at 19:10 No comments:

I've spent a lovely day today learning about rag rugging. For my Mum's birthday I bought her a workshop and obviously I couldn't let her go alone so today we've been busy creating wondrous things under the guidance of crafts-person Gill Curwen. It was a really good workshop which introduced us to several different techniques including proddy, hooking and standing wool. We were encouraged to try each technique and then spend some time developing a small piece of work or a sampler. I particularly liked that as well as introducing us to the basic techniques Gill showed us ways to take things further. She also showed us lots of examples of her own work which were really beautiful and inspiring. We came away keen to take things further and feeling full of enthusiasm. You can find out more about Gill and see some of her work on her website.


Posted by Delicate Stitches at 18:34 No comments: 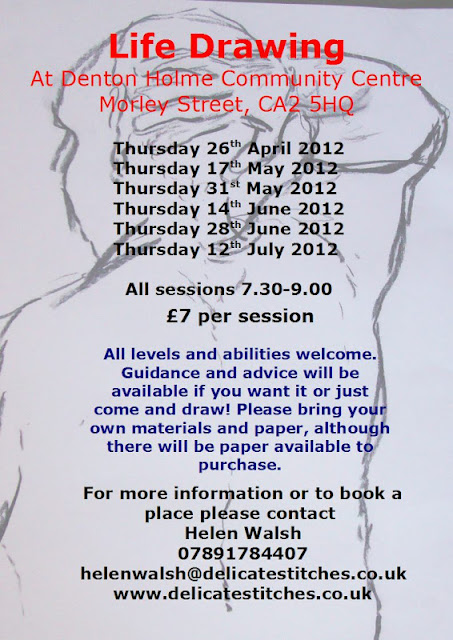 My next life drawing session is this Thursday at Denton Holme Community Centre, all abilities welcome! If you would like any more details just get in touch!
Posted by Delicate Stitches at 16:12 No comments:


This week I have mostly been playing around with crochet flowers and beads. I got the lovely big turquoise button in Edinburgh last week and it just looked so good with the sari yarn. The button is actually made from coconut shell which is pretty cool. The little people beads I ordered on a whim because they're cute and I'm really pleased with how well they work on the brooches. All of the brooches, apart from the purple person one because I love it too much, are available in my Folksy shop.


Posted by Delicate Stitches at 18:00 No comments:

I had a very exciting email yesterday inviting me to participate in a new Craft Festival in Derbyshire. It is called BOB: the Underground Craft Festival and is taking place in September in Bakewell, Derbyshire. I'm really looking forward to it, best get making! Which leads me onto my next topic...

We've recently redecorated our front room and one of the things we did was put some lovely red tiles on our bare concrete fireplace. They look really good and finish the room off. We had a few left over and not liking to see things go to waste I thought I'd do a little experimenting, as you know I'm mildly obsessed with birds so that seemed the obvious way to go.

I thought about using light colours but then decided silhouettes would be more dramatic so I used black ceramic paint. I worked from drawings and pictures of real birds and painted the silhouettes directly onto the tiles. I then baked them to fix the paint which was very stressful as I was sure they were going to crack (and we couldn't have dinner until they were done!) Luckily, it all worked out fine and I'm really pleased with the results. I finished the tiles off by backing them with felt so that they wouldn't scratch any surfaces. I think they're quite dramatic and a bit different from my usual stuff but that's no bad thing. If you like them they are for sale in my Folksy shop!

Posted by Delicate Stitches at 09:27 No comments:


I've had such a lovely day today-no visitors, no work and no jobs and I've been able to get back into my little studio and make stuff! It's been great. One of the things I've made today is a little pincushion owl. He's based on the project I designed for my textile group at Heathlands last year, a simple introductory project to basic sewing skills. I was looking at the pictures and I thought I'd make another, if you like him (or her) I'm going to put him in my Folksy shop.

I've also been up to some other exciting stuff today but it's not quite ready to be shown to the world. Watch this space...
Posted by Delicate Stitches at 18:45 No comments: