Life Drawing always seems to come around very quickly but this time it really did as it was only three weeks since the last session. It was a busy evening, I had 12 artists so a bit of a squeeze but enough room for everyone and a good atmosphere. I asked our model to pose in the centre of the room so we had more space to draw and this also meant a variety of different angles for each pose.


Our model for the evening is a professional life model, he modelled for us quite a bit when I first started running the sessions but this was the first time he's been to our new(ish) venue. We had a range of excellent poses with lots of interest in them, such as twists and crossed limbs. Particularly with experienced models I rarely give much direction for poses as the model generally has much better ideas and certainly has a better idea of what they can hold for the allotted time.


I've had a really busy couple of weeks and haven't been doing as much drawing as I'd like so my focus for this evening was getting back into the 'drawing zone.' Almost all my drawing this evening were blind drawings, meaning that I didn't look at the page at all whilst drawing. I love this way of drawing as it forces you to really focus on what you're looking at and notice things that you may otherwise miss.


As regular readers know I like to try and change something or try something new each session I do so this time I was slowing down my line drawing. I generally draw very quickly, especially when doing blind drawings, but for this session I made a real effort to take more time and try and consider my lines more. I'm quite pleased with some of my slower drawings, especially my heads. This has been something I've been working to improve for a long time and although I still have a way to go I've definitely got better!


Last time I did a more traditional pencil drawing with actual shading. I tried that again this evening but fairly quickly abandoned it as I realised that actually I don't really like shading, I like drawing with line and the challenge of creating form without using tone. It did, however, give me some ideas for teaching life drawing so next time I'm asked to teach a life drawing session I've got a few ideas up my sleeve...

Posted by Delicate Stitches at 19:33 No comments:


I've been working on projects with the Wednesday Art Group at Carleton Day Centre for a number of years now and they're one of my favourite groups to work with. This group (which is a partnership project between Prism Arts and Carlisle Day Services) is comprised of adults with profound disabilities and their support staff I'm always inspired by the enthusiasm and hard work of this group. Over time their confidence and skills have developed hugely so it's always exciting going in and hearing their ideas.

Over the past year they've been working with another of Prism Arts artist on some clay work. They used leaves to make impressions on the clay and then used these leaves to make decorative plaques and bowls. The group is very inspired by the natural world and in particular the wildlife and landscape of Cumbria.


I was particularly impressed with the bowls and for the block of textiles work I was running with the group asked if they'd like to develop this work using machine embroidery and water soluble fabric. They were keen on this idea so we worked with a combination of sheer fabrics, water soluble fabric and embroidery to create a series of delicate bowls. This gave the group a chance to develop their existing skills as well as trying something new. One of the things I love about the bowls is how they change depending on the light, the shadows they cast are almost as beautiful as the bowls themselves.


A couple of the group then wanted to develop the bowl idea in more substantial fabrics and using hand stitch. We used felt (one person used handmade felt from a previous project and another used commercial felt) as a base and experimented with applying sheer fabric over the top and using a simple cut and wrap technique to form the shape of the bowls. They were then embellished with hand stitching. The bowls clearly relate to the smaller bowls whilst having a different character.


The group have exhibited their work a number of times for various projects, for example they have been part of Prism Arts C-Art exhibitions, have had a show at Carleton Day Centre (where they are based) and were part of a project with Tullie House, The Wetlands Trust and Prism Arts. Way back last April when we were planning what the group would do for the year it was very clear that exhibiting their work was a very important aspect of the project. I looked at different venues and approached Carlisle Archives who were happy to work with us.


Previously when the group have exhibited the artists working with them have installed the work but showing at the archives gave the group the opportunity to come down and install the work themselves, an important development for them. We have used two of the archives display cases as the work on show is mostly 3D. Having the work in proper glass cases draws attention to and shows the value of the work created. We called the exhibition 'Precious Leaves' as the work created has a jewel like, precious quality and was inspired by leaves! The work is on show until the end of March so if you're in Carlisle please do pop into the archive centre and have a look. The group are already busy planning their next project!

Posted by Delicate Stitches at 18:43 No comments:


Recently Mr. Stitches and I headed off in search of some warmth and sunshine to Tenerife. Neither of us had been before but we were in need of a rest and a bit of vitamin D and decided that it would be a good place to try. 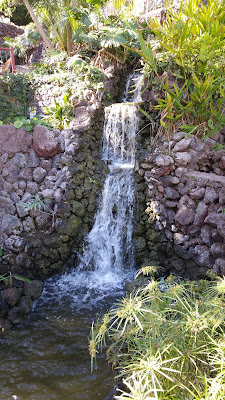 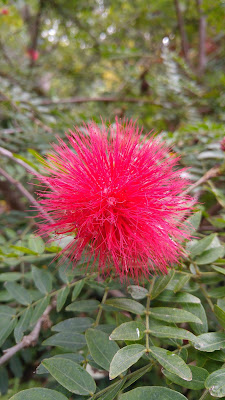 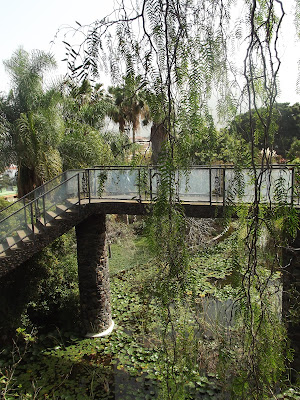 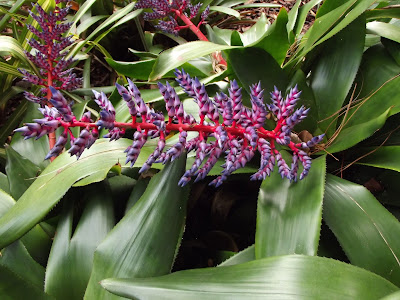 We visited lots of gardens which really inspired me and has made me very keen to get out into my garden. I particularly enjoyed the Jardines Aquatico as it is tiered and pretty well hidden so you keep coming across different parts of it and it feels like a sort of secret garden. I also really enjoyed the Botanic Gardens, so many amazing plants! It felt a little odd to see a lot of the plants we grow as house plants in this country growing outside quite happily there. 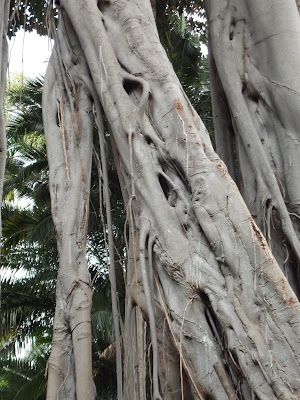 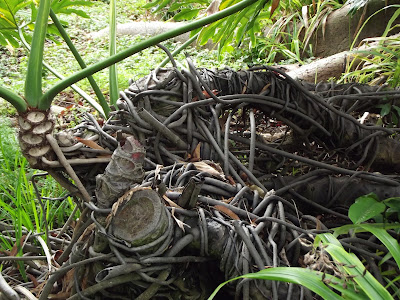 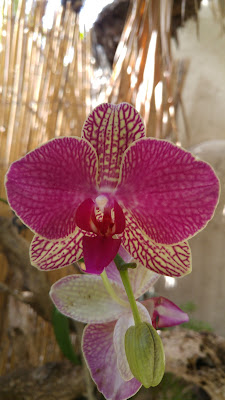 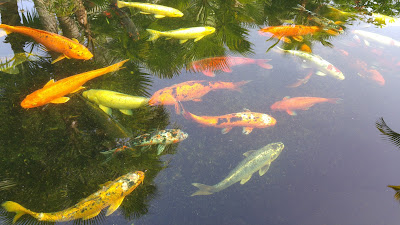 Much of the landscape is quite harsh, it is a volcanic island and there is evidence of this everywhere. We went up Mount Teide, the tall volcano that dominates the island and controls much of its weather, which was really interesting as we saw a range of landscapes high above the clouds. Mostly it was pretty rocky but there were some interesting plants and we were also lucky enough to see the elusive mouflon, a mountain sheep native to Tenerife. 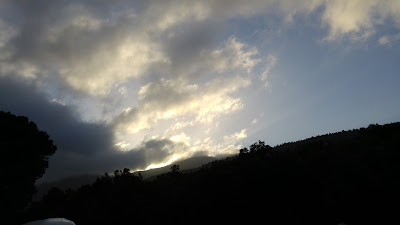 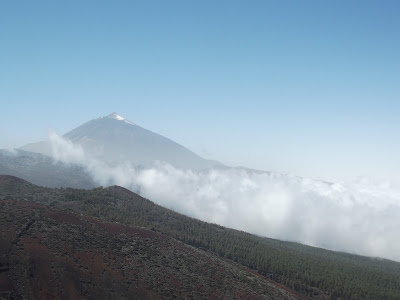 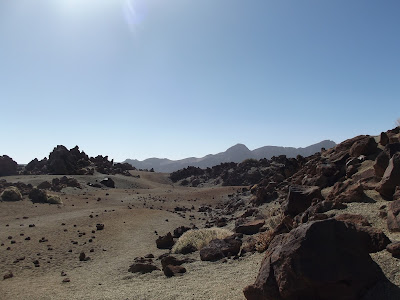 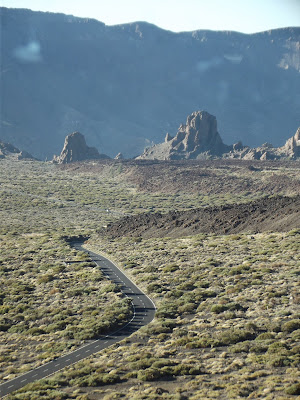 The other highly visible evidence of the volcano is the black sand beaches on the north of the island, where we were staying. I loved the contrast of the bright blue water and the black sand and the strange contrast of my feet burning walking across the hot black sand and then freezing as I stepped into the cold Atlantic surf. There were people swimming in it but a little paddle was enough for me! I was intrigued by all the rocks that has been arranged into cairns, hundreds of them right along the sea front. 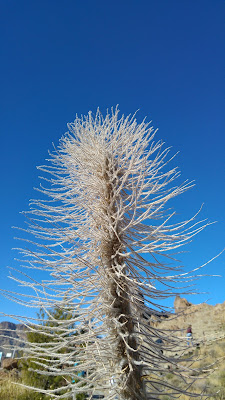 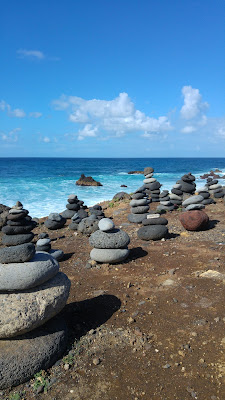 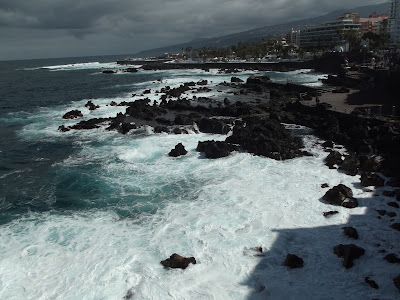 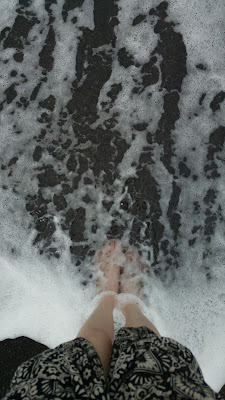 I had hoped to see a blue chaffinch whilst we were over there but sadly we didn't manage to track one down. I was, however, highly amused by seeing canaries in the Canaries. Simple things. Many of the birds out there were familiar but with slight differences, the blue tits for instance are much more strongly coloured than ours. We also saw a great number of lesser kestrels, blackbirds and of course a good few gulls. We also went exploring on the water and saw Atlantic Spotted Dolphins and caught a glimpse of Short Finned Pilot Whales, which are actually also a type of dolphin. 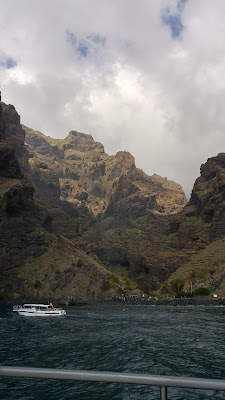 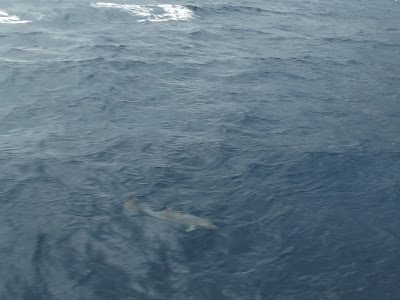 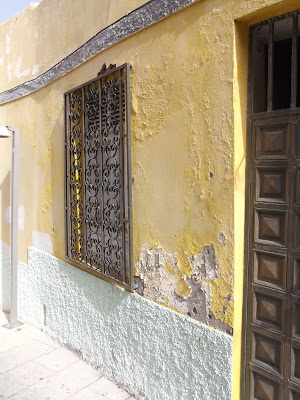 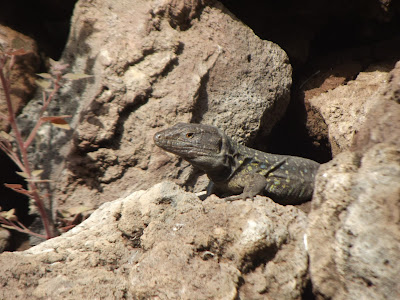 We had a peaceful and relaxing week, walking in the morning and sleeping in the afternoons. I've returned feeling a lot more rested and ready to get back in the studio and to start some new projects. 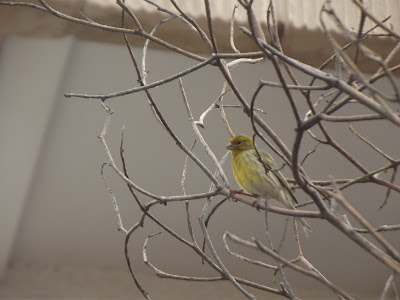 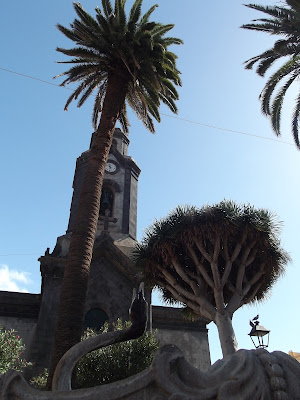 Posted by Delicate Stitches at 19:40 No comments: