I was back at James Rennie School on Wednesday working on our rag-rug sea project again. The students have done really well and we had a lovely day working on the sea, finishing off pom-poms and making some lovely collaged fish to swim in the sea!


These pictures all show the back of the work, it can be difficult working from the back so I think the students did very well and it looks great from the front! It was great to see that some of the students had really got the hang of the techniques and they were very good at helping each other and working together. The piece is really starting to take shape and I think it will look fantastic when it is finished.


Posted by Delicate Stitches at 11:11 No comments:


The last session in this block began on a very cold evening, my first job was to turn the thermostat up and get the room nice and cosy! Our model for the evening was Nick who, as ever, gave us some great poses. I particularly liked the head in hands pose; I just hope it was a pose and not how he was feeling!


I was back to prolific drawing this evening. Recently I've been doing fewer drawings and spending longer on them but tonight that wasn't working for me so I just went with lots of sketches instead. I'm really pleased with how some of these line drawings have turned out. I also reverted to my approach of doing the same drawing several times but with slight variations in media or technique.

This was a 20 minute pose and I focused on the hands and foot:


This pose was also 20 minutes, I started off on a large colored pencil drawing but it didn't turn out very well so I did a couple of pen sketches as well. I really liked the shapes the arms and hands made in this pose:

I also discovered a new technique. I was working (very badly as it turned out) with water-soluble graphite and was trying to get some really dark areas in. Usually I put the graphite onto dry paper and add the water afterwards, using a brush to push the dissolved graphite around. It wasn't going very well so I decided to change tack and tried dipping the graphite into the water and then drawing. It didn't create quite the result I was expecting but I really liked it so did a couple of drawings in this way. They have an inky feel but with a bit more control and less dripping. I like the contrast of the very dark lines when the dampened graphite first hits the paper and the fainter, more subtle lines as it dries out.

Posted by Delicate Stitches at 18:32 No comments:


A while ago my textiles group at The Heathlands Project and I took part in one of Eden Arts's Projects called FLOCK. They're now running another project in support of the Campaign for Wool project which we're also getting involved in. It's called Canopy and one element of it is the Woollen Woods; an installation that anyone can get involved with by making creatures from woolen materials to be displayed in the trees.


So, we've been busy knitting, loom knitting, felting and pom-pom making to create a veritable menagerie of creatures to send to the Woollen Woods.

Posted by Delicate Stitches at 16:34 No comments:


Time keeps doing that flying thing, it's nearly next life drawing session and I haven't blogged about the last one yet, so here we go!


I really enjoyed this session; I was in a drawing mood (which helps) and I was really pleased with how my drawings came out. As ever, somethings worked better than others but overall I was pleased. I was particularly pleased with my line drawings this week, I feel that I captured the poses well and got some good results.


Caf gave us some lovely poses, especially one involving 3 out of 4 limbs which made some interesting shapes to draw.


I was less pleased with my longer drawings this week, although looking back at the long pose I like it more now-it's quite imposing! I'm enjoying experimenting with composition a bit more, choosing a section of the body and working on that and not worrying too much about the rest of it. 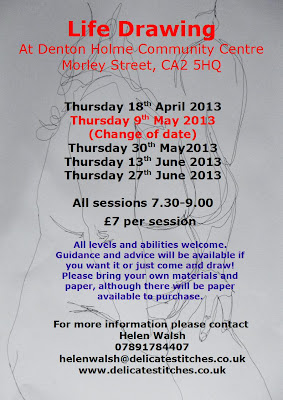 The next set of sessions starts on 18th April, if you would like any more information please get in touch.
Posted by Delicate Stitches at 19:02 No comments:


This week I finished my rag rug piece inspired by the sea. I began this piece when I started working with Jame Rennie School on a textiles project inspired by the sea and have been doing bits and pieces on it since. It's a very relaxing thing to do, like knitting it is simple and repetitive but produces a beautiful fabric.


Originally I had intended to make it into something practical but I actually like the back almost as much as the front so I think I will probably mount the piece between pieces of mount-board and use it as a teaching sample.

Posted by Delicate Stitches at 09:18 No comments:

Quiet? Not a chance! 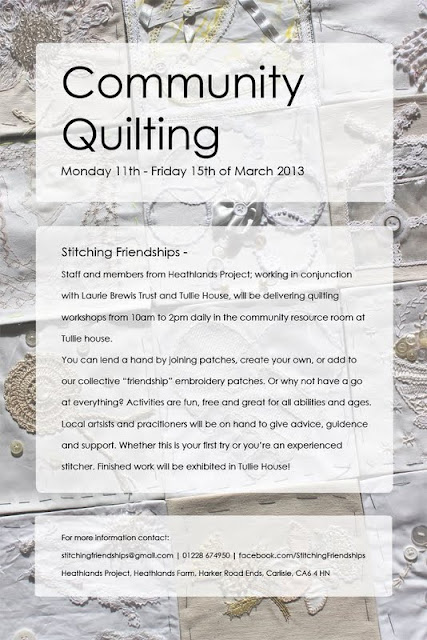 It's all been a bit quiet over here on my blog, but that's because I'm in the middle of a great project which you can find out all about by visiting this blog! If you're in Carlisle and would like to join in please do come on down and add your stitches. I'll be at Tullie House all week between 10-2 so come and say hi!
Posted by Delicate Stitches at 19:34 No comments:

We're in the process of moving house at the moment. One of the most exciting things (for me!) about the new house is that I have a beautiful new studio. It has a lovely bay window and is huge and bright. It is so fantastic to have not only space to have all my materials and tools accessible but to have loads of space to work too. I have my big table in the window and soon I will have a lovely sofa bed so that long suffering partner can come and sit and talk to me while I work and people can come and stay with us without me having to move everything (which was the case in the previous house.)

It was the first room we decorated (I couldn't wait) and I'm so pleased with how it's turned out. I think it's a lovely and calm, inspiring space even with all my stuff in. I like looking round and seeing everything and am looking forward to getting more work up.

I love going over to work in my room, I'm full of ideas and it's great to be able to have a space to leave stuff out and to be able to work on several things at once. The only downside is I have to keep going to work so we can afford to pay for it!

Posted by Delicate Stitches at 19:56 No comments: